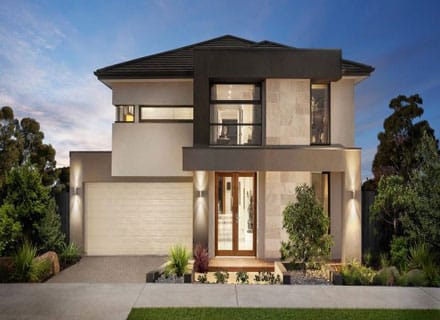 The proportion of properties jointly owned is quite high, and with greater education on tax minimisation practices, we’re seeing a lot more obscure ownership percentages like 70/30 or even 99/1.

Why are people employing these types of ownership structures? It all comes down to which party can benefit the most from the deductions.

Take for example a couple who decide to invest in property. Person 1 earns $160,000 per year, and person 2 earns $45,000 per year. Let’s assume that between depreciation and the net loss on the property after rent and interest, there’s $30,000 worth of deductions across the whole property. The scenarios could be as follows in the 2015/2016 financial year; 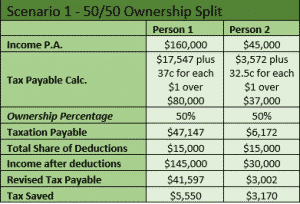 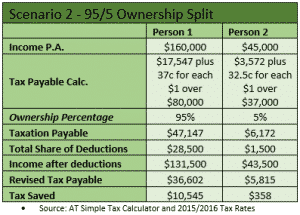 So apportioning the net losses to the highest wage earner is an effective strategy.

Depreciation schedules can also provide an additional benefit based on some key calculations for accelerated rates. Let’s look at two major ways in which deductions can be supercharged;

Once we understand these main concepts, we can see how a split ownership structure can become beneficial.

Straight away, the carpet in each separate report would qualify for low value pooling rates of 18.75 in the first year, and 37.5% each year thereafter. There’s an additional advantage with pooled assets and the pro-rata calculation as well, but that’s another article!

Looking into the impact of split reports on assets under $301, let’s consider the property has one air conditioning room unit worth $580. As one entity, a room unit would qualify for the low value pool, but not as an asset that can be written off at $300 or less. However, with a 50/50 split, the asset is now worth $290 to each person, therefore allowing it to be an instant deduction. Each party will receive a $290 in the first financial year.

When we prepare these split reports, we prepare a master report showing the property deductions as one entity, and then the deductions in a separate report for each party. We’re often receiving calls from accountants asking why the figures don’t add up. The total deductions will be the same over the lifetime of the report, but the yearly deductions will be higher when spit apart, than what they would be together.

In a real world case study recently completed by our office, we had a very average property showing $2,144 worth of deductions within the 1st partial year, and $2,015 in the 2nd year. Under the split arrangement, the totals were $3,240 for the 1st partial year and $2,009 in the second year. Essentially this couple we’re able to bring forward their deductions earlier, and we all know a dollar today is worth more than a dollar tomorrow!