There are several commercial property types that fall under this general category.

They can broadly be grouped into the three categories below.

Majority of deductions will be in Sheds, Dams, Fencing & Irrigation

Most of the deductions will come from Trellis, Irrigation, Fences, Dams & Storage Sheds.

Additional machinery is required to ferment and bottle the wines where Barrels, Winery fermenters, Grape crushers and holding sheds would add even more value.

In terms of tax depreciation and available deductions, farms tend to be skewed much more towards plant and equipment claims (Div 40) rather than structure (Div 43). Due to this, farm deductions tend to be very high, but also typically have a steep drop off where a large chunk of the depreciation is claimed in the first 5 years of the 40-year report. Also due to a relative lack of structural claims, it is difficult to ascertain what rates would be “average” for farmstead structures but considering most of the claimable portions will simply be residential in nature then the average would be between $1,400-$2,200 per sqm. 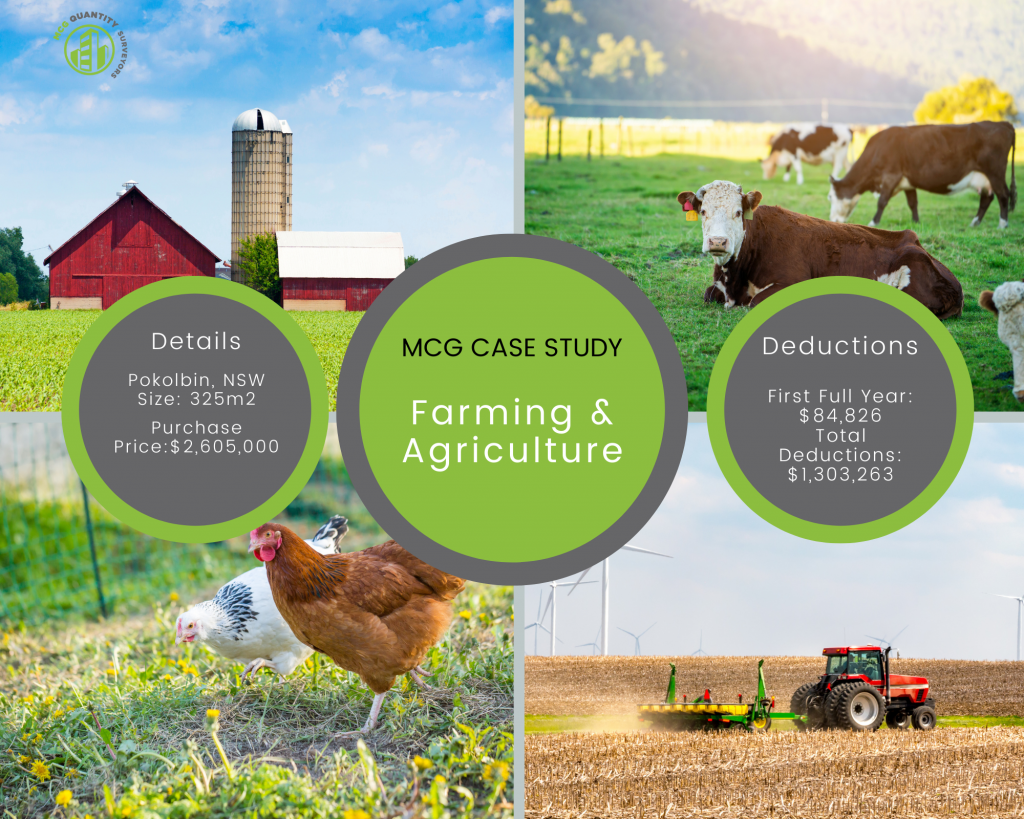 Outside of the above-mentioned scenarios, the most common value-adding assets across all farms are found below

Due to changes in the Australian Federal taxation legislation, farms can also fall under what is known as “Primary Production” which means that some assets such as fencing, dams and irrigation can be claimed in their entirety the year of installation so long as they were added after purchase. Coupled with this, a lot of farms will also fall under the “Small Business Entity” rules which allows the farms assets to be depreciated at an accelerated rate where existing items are immediately pooled and depreciated at a flat 30% until there is no value left and newly acquired assets will depreciate at 15% for the year of acquisition and then 30% each year thereafter. On top of this, there is also another ruling for immediate write offs for SBE primary producers which is as follows:

A Quantity Surveyor should be able to answer all of your detailed questions and will ensure that no items are missed, the maximum claim is made and that the report complies with the ever changing rules prescribed by the Australian Taxation Office (ATO).